From the Journal of Marc Quin

Let us start this story with the day that our heroes met. That faithful day, Faün, a Deva lady of arcane arts, was making her way to Winterhaven. She travelled with Shai Lahaha, a skillful - though somewhat sneaky - thiefling with a love for daggers; Haian Longshot, wandering elf and master tracker, always accompanied by his lizard companion Semmy; and Marc Quin, a leaned swordsman that could be heard many a time arguing that he was probably the only one capable of defending their fellowship. All three had agreed to aid Faün in her quest, probably all for their own reasons.

Somewhere along the road, Marc and Haian noticed some footprints and Haian decided to scout ahead. Not far from where the others waited, he discovered the ambush. Haian turned and shouted to his companions to watch out. Not a wise move; before anyone could react, six meager kobolds had already surrounded the elf and were slashing away at him. 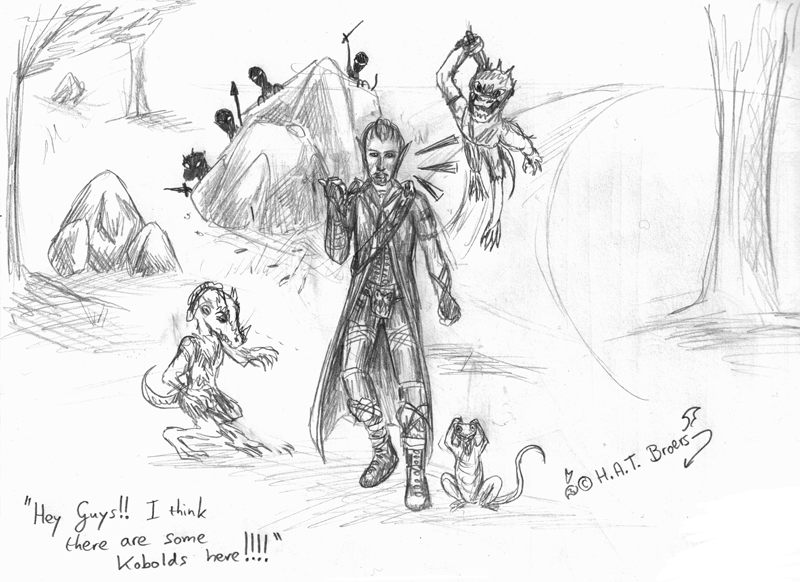 The kobolds must have been driven by despair; they seemed weak and tired, and Haian had no trouble dodging and parrying each of their attacks. Marc was the first to respond and run forward. Two kobolds fell at his first blow, another two at the second. By then, Haian’s arrow shafts grew from the chests of the last two. In the meantime, Shai slipped past the kobold’s first line of attack to attack three others that were attacking with slings from a distance. Faün stayed at a distance, trying to get a good shot at three stronger kobolds that were encircling Haian and Marc, who were now fighting back to back.

The noise of battle was overheard by Delral, a dwarven holy man, who was also headed for Winterhaven with his three companions. Rothyrn, a Gnoll that clearly was the most practical of the group, suggested they could simply avoid trouble by circling around the melee. David the Goliath, a positively huge man from the mountains, showed more mercy and announced that it was their duty to help these poor people, which were clearly much weaker than themselves. Together with Eldarwen an elven lady with vampire blood in het veins and her fox companion Haakon, they attacked the kobolds from the other side.

Rothyrn sped forward and at the kobold slinger he had chosen, he met Shai. Together they butchered to poor creature. Rothyrn did the same with the other two. The giant David roared a threat at a fourth slinger. It’s unlikely the vile creature could have understood David’s words, but it surely got the general idea, because it ran of nonetheless. When all eight heroes gathered at the centre of the battlefield amidst the corpses of some twelve kobolds, Semmy the lizard had just torn open the back of the last kobold, which had been trying to get away.

Now that the battle was over, it turned out that Haian and Eldarwen already knew each other. The story of their common past, however, should be told another time. Making acquaintance did not go so well for the others. Shai and Rothyrn each seemed more interested in the spoils of the battle; Shai obtained a few silver pieces and some daggers, while Rothryn seemed pleased with the opportunity of tasting some kobold limbs… Faün tried to befriend the other leader, Delral, but the conversation was hindered by the fact that neither of them was eager to share the specifics of their missions with each other. In the end, both groups agreed to travel together, because they all had to get to Winterhaven anyway.