From the Journal of Marc Quin

Just been ambushed by kobolds. Was barely able to keep Haian alive after he startled them. He is skilled but, my word, he is going to get us killed someday. Four travelers helped. They will join us to Winterhaven.

We reached Winterhaven a few hours ago. With the eight of us together, we didn’t encounter any more trouble. Still, relaxing at an inn and a bit of writing both are a welcome change after days of travel. Winterhaven seems nothing special at first sight, except for a single thin tower that seem to house a griffon. The villagers didn’t seem impressed with the beast, though. 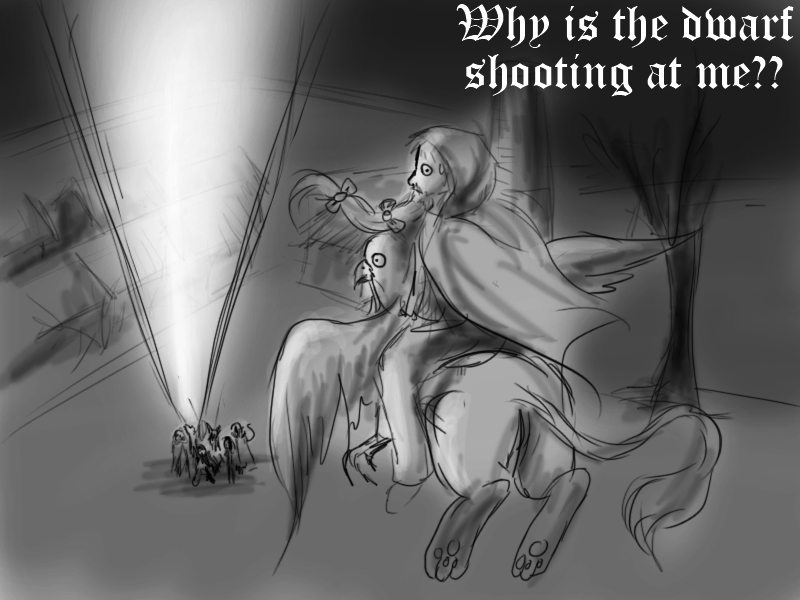 When we first entered the inn, it actually was far from certain that there would be any relaxing. The innkeeper has a no-pets-inside-policy, which is fine by me, but she also has mistaken the gnoll Rothyrn for one. I could hardly blame her, given the fact that the remains of his “kobold breakfast” were still in his fur at the time; a savage appearance, to say the least. However, Rothyrn himself, of course, hadn’t the slightest idea of why people would feel uncomfortable to let him in. I get the idea that he hasn’t dealt with human etiquette … ever. From what he tells us, he has been a slave of the Drow for a long time. I guess I feel kind of sorry for him but, my word, he’ll have to learn how to be… not a total barbarian if he is to survive another week in this town.

In the end, it was fairly easy to convince the innkeeper of Rothyrn’s … sentience, and she agreed to let him in if we would have him clean himself. Now THAT was nót fairly easy. Eventually however, Eldarwen sacrificed her comb to remove the most of the blood from Rothyrns fur. After that, we could finaly enter, and Haian ordered a feast to thank David’s group for their help with the kobolds. It was nice.

Winterhaven seems to be in a state of paranoia. Not only is there an enforced curfew, also, new visitors of the town (i.e. us) are brought before the lord. During the meal, a guard ordered us to appear at the castle. We don’t seem to have any choice. We will be going in a second.

We’re back from the castle. I should have known that, even in this godforsaken place, I would eventually run into the House again; I immediately recognized the emblem of the House of Alquinn on the door of the lords quarters.

The lord of Winterhaven isn’t a cheery person. He did not recognize me, though, or hid it well. It was nice to hear Rothyrn finally explain what his group is for in Winterhaven. Apparently David is following a rumour of some cult that should be active around here. The lord seemed unpleased with this idea, as he strongly rejected the notion of any cult in Winterhaven. Anyway, the tower we saw earlier turns out to belong to a seer, and the lord has promised to let us establish contact with him if we remove some more kobolds from the area. I don’t know what’s going on with the cults and the kobolds, but the seer might be able to tell me more about Douven, so I made sure to be included in the deal.

What the hell is that at my window?!

For crying out loud, that damned fur-ball has just sneaked into my room and trashed my bed. My word, Haian, weren’t elves supposed to be vigilant and all that? How on earth does one sleep through this creature waking up and breaking open a stable? Well, whatever, going to finally get some sleep now, I hope.

So we went to take on the kobolds. Faün didn’t join us, she went her own way today. No idea were Shai is, probably robbing some orphanage or something. Rothyrn and Eldarwen didn’t believe it necessary to bring either Delran or David, so it was just the four of us. It took us some time to find the kobold lair. Fight was tougher than I had thought. I went down twice. Good thing Haian is still with us, too, wouldn’t have made it without his arrow support.

Lair entrance was locked with a interesting magic circle. Examining it more thoroughly now. It seems to focus my mind when I’m in it, and it’s effect is absolutely stunning on Rothyrn. I need to learn how to reproduce this.

I first tried to copy the symbols to my ritual book, but it was no good. I failed to perform the Amanuensis ritual correctly.

Interestingly, some of the rituals energy seems to have backfired and stuck to my research glasses.

(a lot of equations, some of them done over several times)

I have no idea how this is possible, but I managed to project the whole enchantment on the glasses. They broke in the process though. I’ll keep one myself. Rothryn (and I think everyone else) will be pleased when I give him the other. 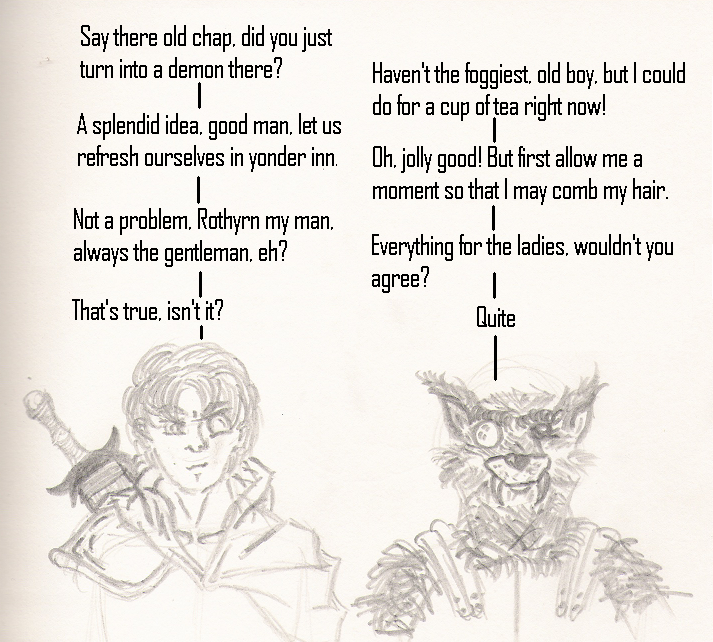 They have found some letters on the body of that big goblin. I better have a look.